Weee-oooo! Hong Kong's government in their kindness will let people start on a so called 0 + 0 from this week.*

, I mean enforced quarantine, and apparently when you fly into Hong Kong from abroad like I did with only - gasp! - 2x experimental drugs in your body instead of 3 or preferably more, you can now just go for a coffee or something, willy-nilly. Well, you still have to show a QR code, but not a vaccine pass. Or was it the other way around? Sources on the ground in Hong Kong tell me it now takes three clicks on the app, up from before, one.

I had to wait three days for that code. Twice. Well, three and a half and four respectively, because the day you land doesn't count. Well, it counts as one when you are taking the three PCR tests, the first being when you arrive and then two more, but in between tests you have to self test and take a photo of it with the date and upload it, and you register your phone number when you land but by the second test it has suddenly changed so you can only register if you have a HK phone number and anyway it's only two PCR tests now, that changed in mid-test on Monday, and... Confused yet?

And so were the many, many nurses? Health officers? I spoke to, asking how the hell I was supposed to get my "Leave Home Safe" app tracking device to change from AMBER code (with which I was locked out from all establishments where the removal of the sacred mask would be necessary - not even the Hong Kong government could justify keeping restaurants and bars closed any longer) to BLUE code which would magically get me in everywhere. No one knew.

See, at this stage I was still so naïve and Luddite, I thought QR codes on a piece of paper and a letter in Spanish from Clinica Rotger were what I needed to leave home SAFELY. But no! However, after a long phone conversation with someone at the Health something department, I finally found out I could get a 'provisional vaccine' pass. And that only two unproven medical experiment jabs would be enough! And where would I get this pass into the app?

She thought a while.

But of course! Duh! I should have thought of that. The post office is always the answer to all your health questions.

The next day I set off by ferry to Central, and bugger me if the Central Post Office didn't have a whole window just dealing with covid this and that. After a quick look at my phone (no need to show the stack of papers I had with me) - ping! There it was. My beautiful blue QR code that would allow me entry into all establishments eating and drinking. Yaooooo!

It turned out it would all have happened automatically on the fourth day of my stay in Hong Kong. All I would have had to do was click on Vaccine Pass in the app I had uploaded weeks before. No one in the health department, the PCR testing stations or anywhere, could tell me this. But of course!

*I started writing this just before Christmas. In the meantime, the HK government with little John Lee at the helm, has removed all codes and requirements - now you can just fly to Hong Kong, walk straight through the airport and into the nearest restaurant. IN the airport, for that matter! AMAZING. What a kindness! 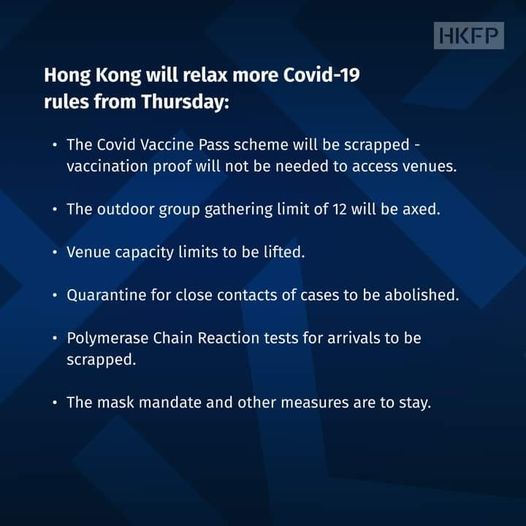 You still have to wear a mask outside at all times  though. Until at least after the winter, a presumably beaming Little John could assure us even while I was there. He also said "The pearl of Hong Kong is shining brighter than ever!" Quite.