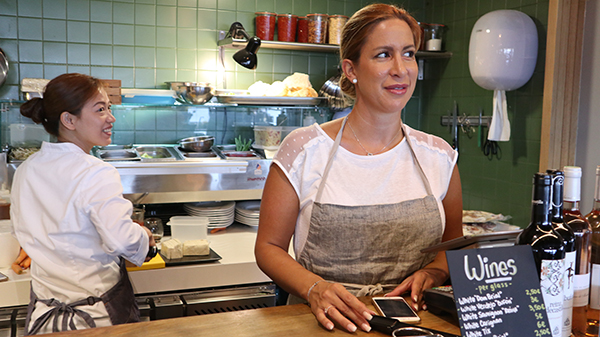 I have often wondered why, when a country's inhabitants move and start to recreate their cuisine abroad, they think they have to make the food a lot sweeter than it was when it was "at home". I have noticed it especially with Chinese and Indian restaurants in the US, Norway and now here in Mallorca. No matter if the chef is a native of the country or someone from somewhere else who has learnt the noble art of cooking foreign and exotic food, in goes the sugar by the carload. 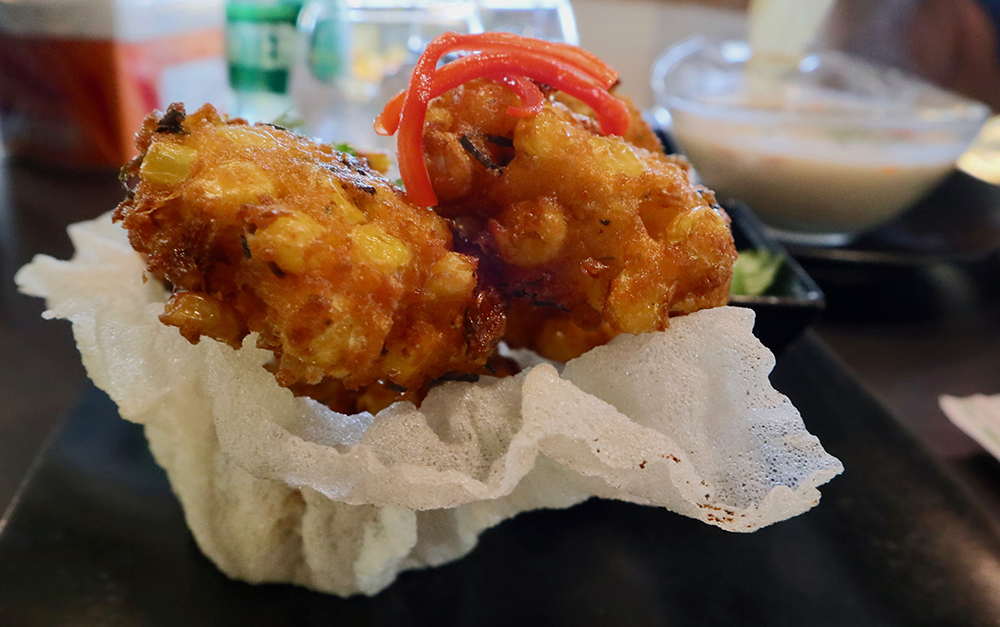 I was thinking about that the other day when my friend S was kind enough to invite me to lunch, and in a place well within the radius of my new 8 minute rule (spending the next few months checking out ALL the hospitality establishment that are 8 minutes' walk from my place or less), namely Mercat 1930 Palma Gastronomic Market

. It is an intriguing-looking place on the Passeig Maritimo which I have often passed on dog walks, wanting to try it out. So here we were among the seven different categories of food: Andalusian Specialities, Croquettes and Battered, Iberian Sausages, Tapas, Sweet Stuff, Healthy Food and Drinks and Thai Innovative. Spoilt for choice indeed! 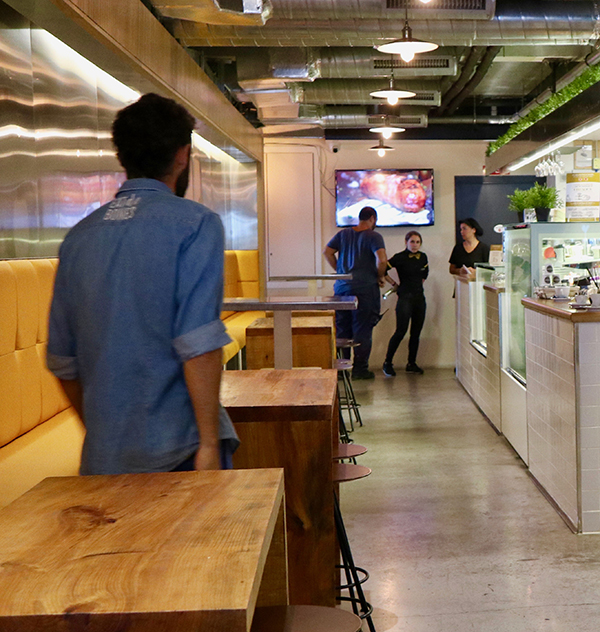 The Market has been there since 1910 but has of course been gentrified and hipsterified - most of the tables are high and perch-y which isn't my favourite but is the way of the world now. The further away from the floor, the healthier and more gluten-free it is, seems to be the philosophy. Having said that, it's far better than sitting folded up with stomach squashed together on a sofa. 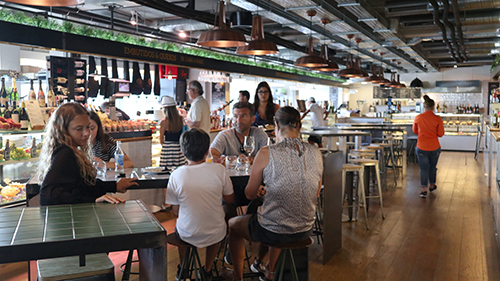 Anyway, my friend chose Thai, which I of course love. Who doesn't? We both had Corn Fritters, and they were better than anything I have tasted in Thailand or Hong Kong. Succulent! Beautiful! With a slight crunch! And beautifully presented. And the sauce looked so beautiful. Yes looked. 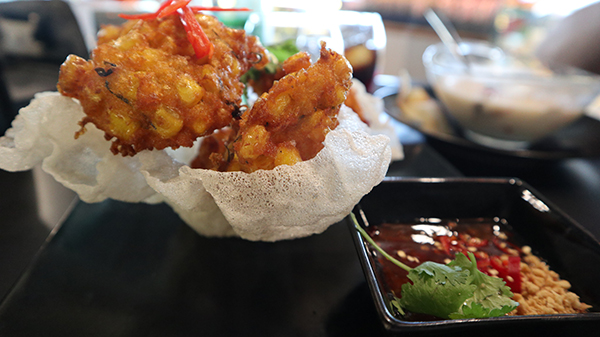 But the taste was - hot, good, but also sickeningly sweet. I know, the sauce Thai cooking uses for for example prawn cake is supposed to be sweet - and unfortunately normally comes out of a bottle. But this was something else in the sweet-stakes. It was almost inedible. So we quickly tucked into the main course: 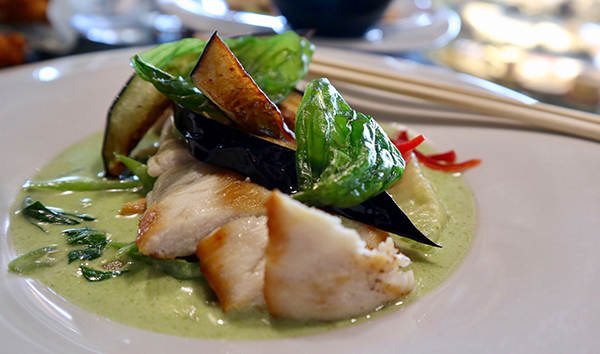 Chicken green curry. It was innovate all right, in that it didn't look like a normal Thai curry, where the ingredients are kind of submerged in the sauce. This was more like cold chicken slivers and aubergine resting on a vaguely green curry-tasting sauce. Beautiful of course, and delicious. And, fortunately, not over-sweet. And they had chopsticks! So, almost full marks for Mercat 1930 for me; I will definitely have especially Corn Fritters again in the future, but with a different sauce/dip. What IS it with this addiction to sugar?

Spanish Course 1. Words That Don't Sound Like Their Meaning 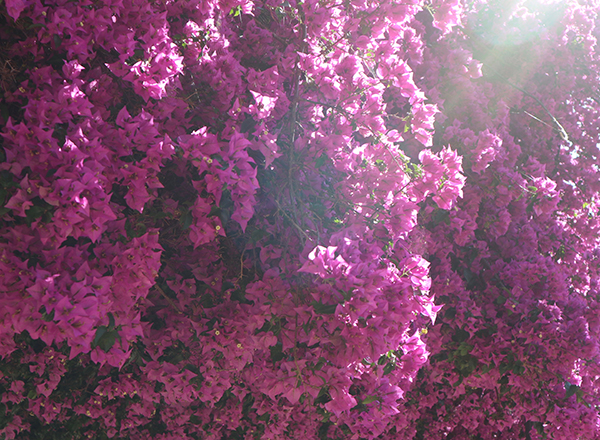 Welcome to Mallorca! In this series of Spanish Words that Don't Sound Like Their Meaning, I will showcase some of the charming places I walk past almost every day, as well as teach you Spanish. 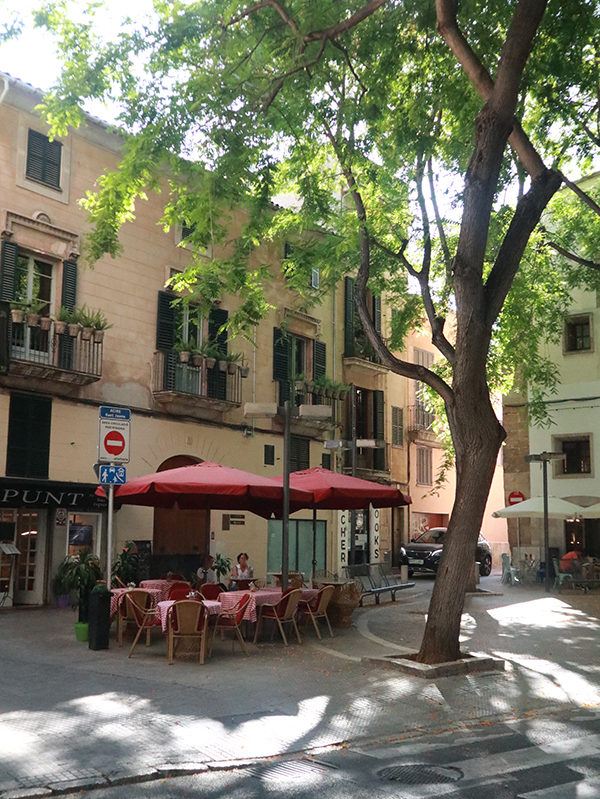 Zanahoria. Sounds romantic, doesn't it? Kind of like an Egyptian princess who has been kidnapped and sold into slavery, languishing in some harem somewhere dressed in gauze and with many dangling earrings, all gold.

OR a dark-haired concubine/courtesan who has risen up through the ranks and eventually married the emperor through guile, elbowing out all competition.

That's what I thought when I first read the word ZANAHORIA.

So it came as something o a shock, or letdown at least, to find out that it means

P.S. Learn Cantonese the Natural Way - From a Norwegian! 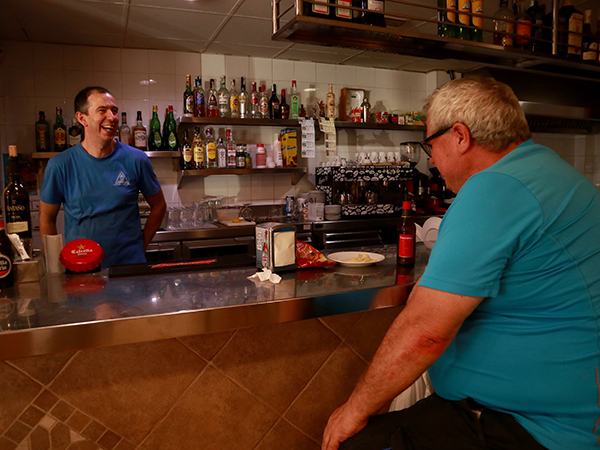 I have to pinch myself sometimes when I stick my head out the door and realise I actually live in El Terreno in Palma de Mallorca! It's just a little over a year ago that I first discovered this quirky, charming neighbourhood. I was staying in the centre of Palma, on a five day sojourn to see if Mallorca was worth giving up 30 years in China and Hong Kong for. On one of my walks I found El Terreno with its narrow streets, Mediterranean but urban feel, and the enormous Bellver Forest cloaking it like a benevolent ... cloak. This was the place for me! And my dogs! 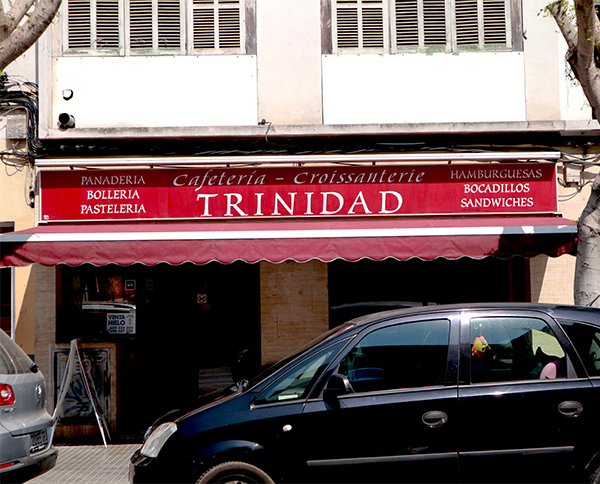 It's probably going to take me more than a month to check out all the hospitality establishments within even 8 minutes' walk, but I will! Living somewhere convenient and beautiful is huge for me, because when I lived in hong Kong I had to travel for 10 to 25 minutes by bus just to go shopping.

Let me kick off with the café closest to my house, ten meters away: Trinidad Cafeteria. First of all, it opens at 06:00! Almost every day! Including Sundays! The Mallorquins seem to take all meals and drinks outside the house, so the Trinidad is quite full of breakfasters at 06:00 - I know because I walk past with the first dog patrol of the day - nurses, building workers, post office workers and lots of neighbours. They sit outside the Trinidad enjoying the first life-giving smoke of the day while their grizzled and cataract-y mutts try to sniff up me and my ginger brute Koldbrann as we thunder past. 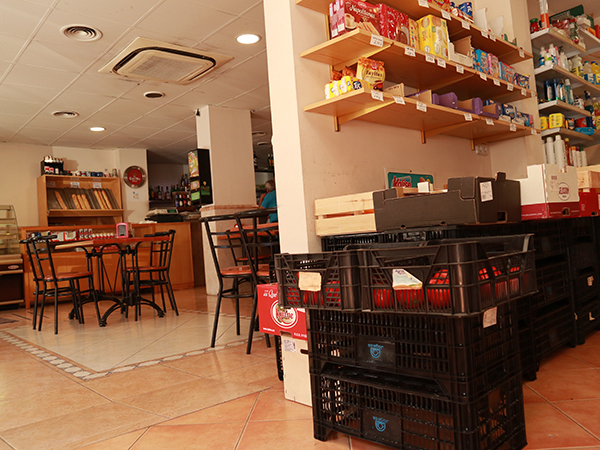 Unfortunately the Trinidad is closed all winter, if it wasn't I would go every day. Because not only does Luis, as the owner is called, do very decent bocadillas  and tostadas AND answers all my questions about Spanish (in Spanish because he doesn't speak much English) - the café doubles as a supermercado (supermarket), which I would call a tiny grocery shop. From 06:00 onwards you can buy fresh fruit and vegetables, bread and crisps, canned goods, hams and cheeses, milk, coffee, wine and beer. And shampoo, cleaning agents, toothpaste... And newspapers! When you tire of reading you can watch TV and have a go on the old gambling machine. Or have a draft beer. 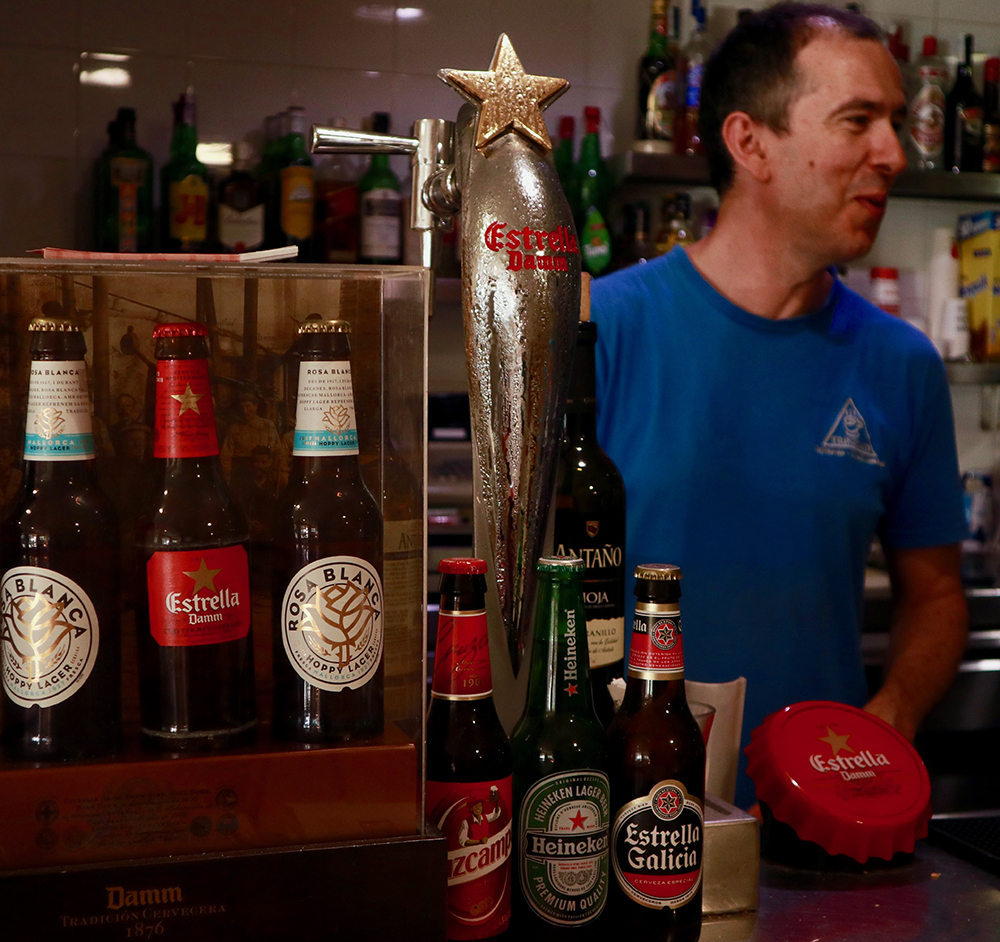 Luis is so kind and patient and laughs at my jokes. He also corrects my pronunciation. YES!!!! Don't close this winter, Luis! I'll keep it economically viable. Because to get to the second closest establishment to my house... I'll have to cross the street!

Homemade Bread with a Norwegian Smile in Cala Major

I'm starting a new series of Rolling Armchair Travel pieces from Palma de Mallorca! Yes, Rolling Armchair. It means I'm kind of sitting down - while moving! I will show you Palma and Mallorca from a sedentary tourist/semi-active resident's point of view, without the risk-taking. 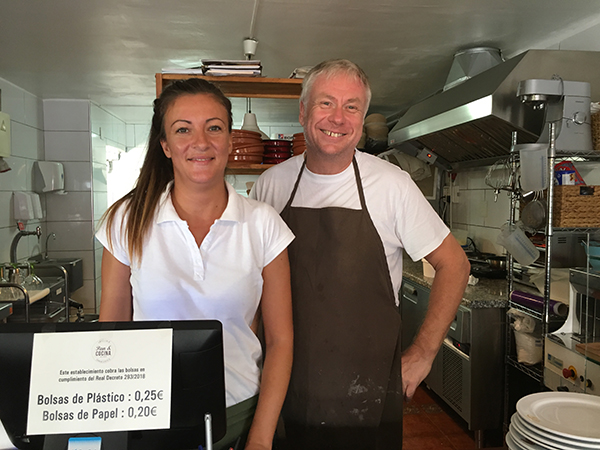 Cala Major is a kind of poorer country cousin of Palma. There is no Old Town, no cathedral; not much in terms of tourist attractions at all. But the little town, about 20 minutes away by bus from downtown Palma, is often the first port of call for tourists as well as people dipping their first tentative toe into The Big Move to Mallorca. Full of flats for rent for single people, with a decent amount of not super-expensive hotels, central but not too, with fantastic views of the Mediterranean and a decent nightlife without being Death-Boozing Airways Central, Cala Major is non-flashy Mallorca in a nutshell. 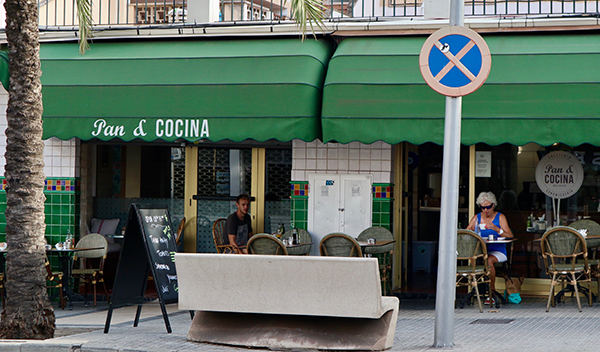 It was the non-flashiness that attracted the Norwegian cook Jan-Owe Jensen to buy a property and start Cala Major's first early morning café, Pan & Cocina (Bread and kitchen) here. The first thing you notice is that he loves dogs! He even welcomes them inside the sparkling clean, classic café-looking café. He is one of the few if not the only café owner in Palma baking his own bread, and that and the rather larger portions than is the norm in Palma, makes me go back and back. That, and to talk to the jovial and welcoming Jensen, naturally. Oh, and his superb coffee, strong as hell.

And unlike the typical local restaurants and cafés, he also serves healthy stuff like home made granola, egg and bacon (yes it's healthy!) and avocado this and that. I have to say though, his bocadillo (toasted baguette) with York ham and egg and tomato paste is not for the fearful! Six hours after eating it you will still feel full. Which gives you so much more spare time to explore and check out non food-related things! Or ride a bicycle to the other side of the island. 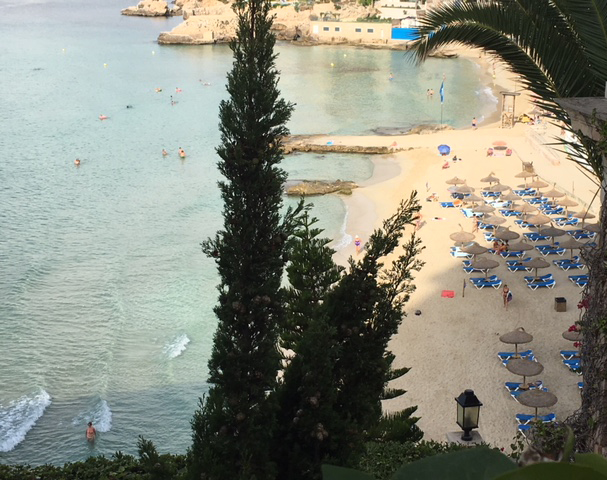 Cala Major Beach around 9AM 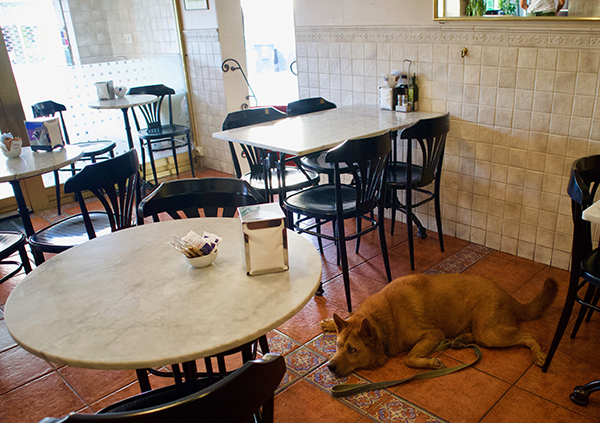 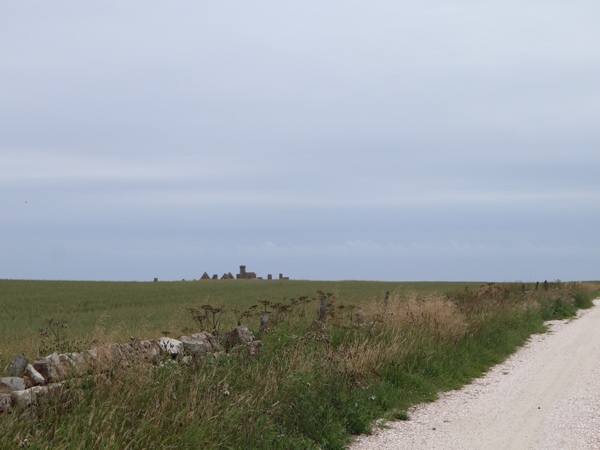 As we get out of the car and start walking towards New Slains Castle - a mere stripling of 420 years, whereas the old Slains Castle was built in the 13th century - my friend M remarks: "This was the inspiration for Bram Stoker's Dracula."

What? I thought Dracula was in Transylvania, not really fictional, and certainly not flapping around in a ruined castle near Aberdeen on the east coast of Scotland! But it turns out that Stoker had been staying near, perhaps even been a guest in, this bleak and eerie castle. The year was 1895 and the castle, having originally been built as a round tower, was in its last reincarnation as a  "Scots Baronial Manor." 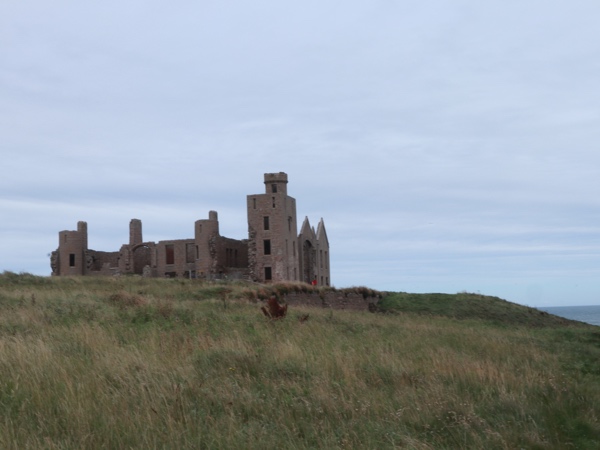 Think Rebecca, think the Addams Family and everything scary, creepy - but presumably with a roof, at least. That somewhat essential part of modern living had had to be taken down (or off) by the last owner, Sir John Ellerman, to avoid taxes. And without a roof there was only one way to go for this gaff, really.

Now it's sitting there, creepy as hell, protected from sea attackers by cliffs and a natural deep gash in the landscape forming a semi moat. Even if it had a roof, some floorings and maybe a window or two, I would think twice about living there. 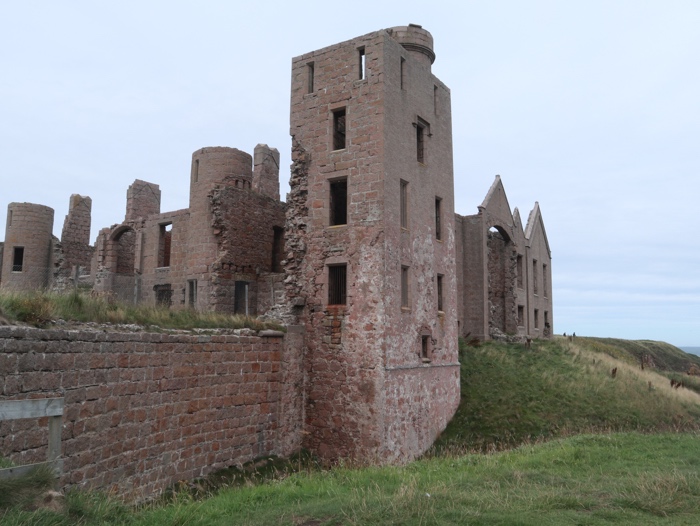 Plans to restore it to its former (ugliness?) glory have been afoot since 2004, but so far it seems they have gone the way of all Brexit. Meanwhile, people have wasting no time in taking advantage of the remote setting, general creepiness and car accessibility. 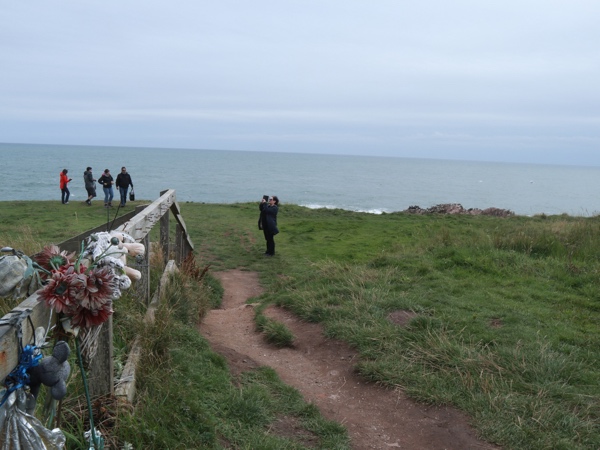 "They just drive past the castle at top speed and keep driving", my friend M said darkly. Others have jumped or "fallen" from the cliffs. And indeed, on a weatherbeaten fence outside the castle hang a few forlorn teddybears and plastic flowers waving a sad farewell.

This is not the cheeriest part of Scotland by any stretch of the imagination, but a treasure trove for those who possess one. Especially one of the morbid kind.

Open 24 hours a day - to the elements