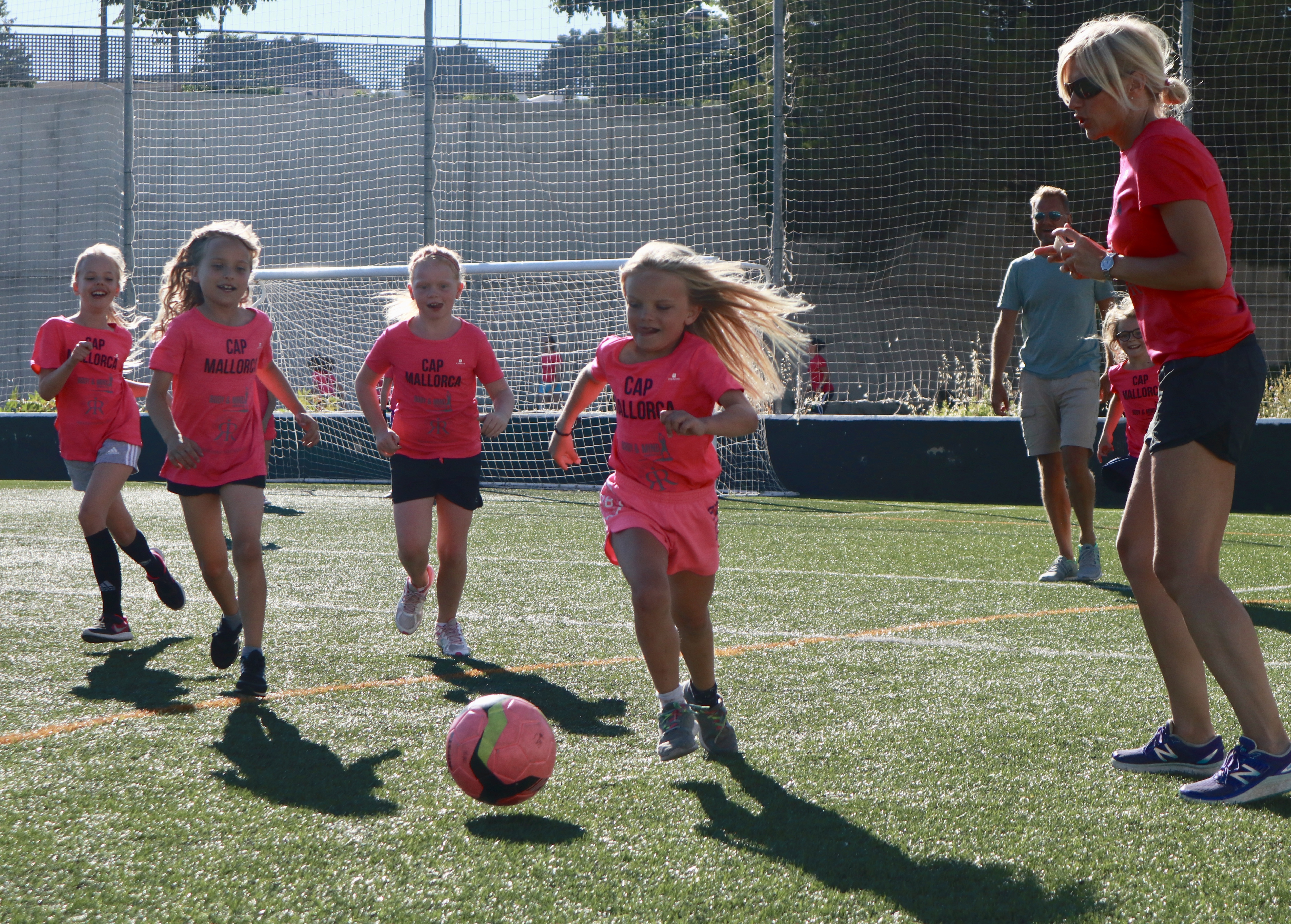 OK - no. I'm still not really interested in football. But I have to say this: When I lived in Hong Kong, any given World Cup match was at 2AM if you were lucky, except that wonderful year when the Koreans and Japanese burst upon the scene with their long, glossy black hair and stadium-cleaning, non-hooliganistic fans. Now I can saunter down to a nearby bar like English Pub Sindi's or seven or eight other establishments with full Cup coverage less than five minutes' walk away.

So yes, although it is out, Spain wins hands down. 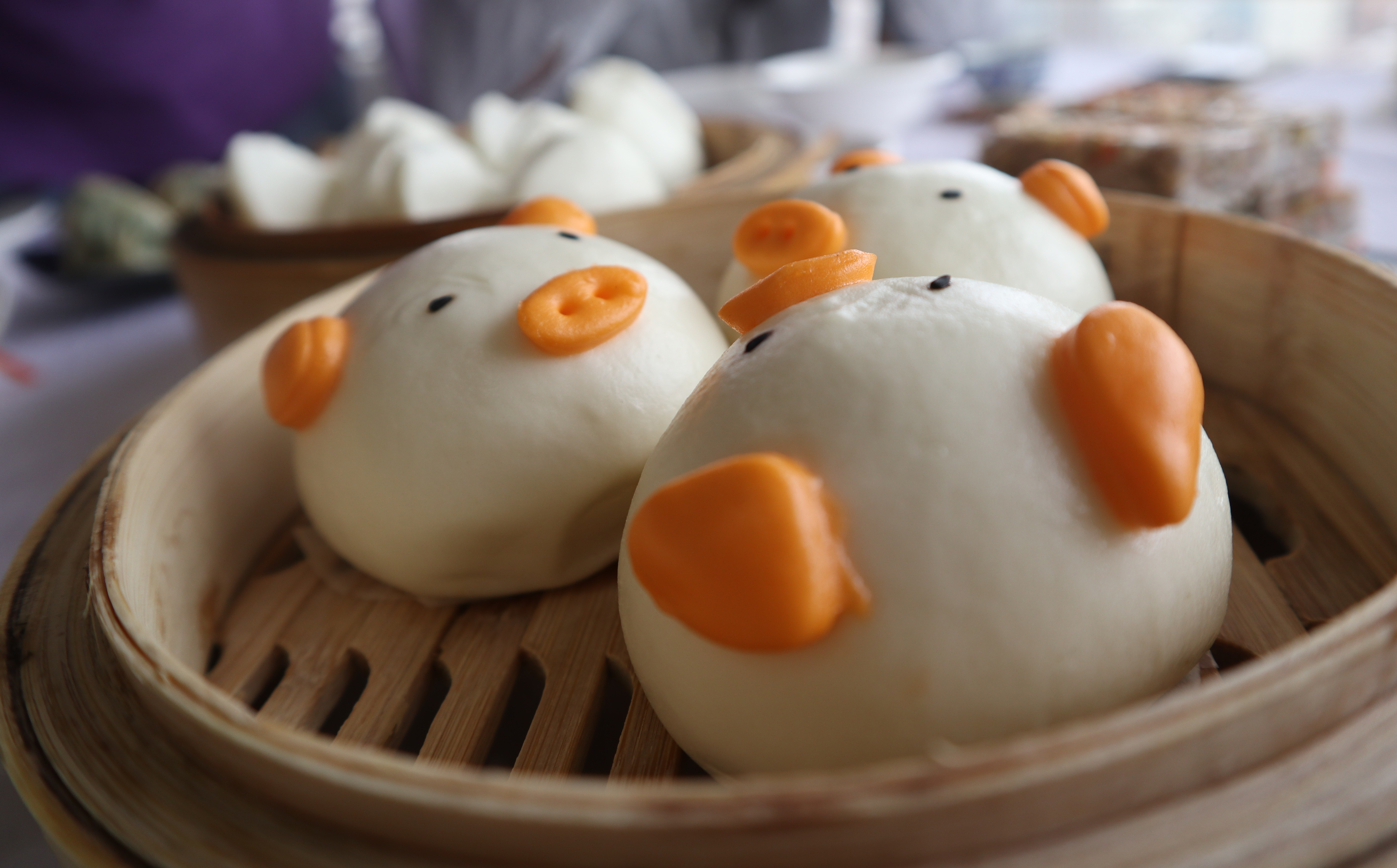 I admit it, I miss speaking Cantonese every day, but at least I have my students!

When I first arrived on Mallorca in January, I never thought I'd be teaching Cantonese, but modern technology thought otherwise. Skype is now helping me carry out my life's mission: To make Cantonese a world language. The world, quite frankly, deserves it!

But no one can make Cantonese a world language on an empty stomach, so first we must go to 飲茶 - yam cha - "drink tea". Which is all about eating. but also, a little, about tea! So this video is dedicated to my faithful students Ah-Mei (Deborah) Ah-Sai (Simon) Ah-Gong (Tom) Ah-Dak (Peter) Ah-Man (James) and Ah-Fu (Jakab), who are sensibly Learning Cantonese the Natural Way - From a Norwegian!

Feeling Bored? Try a Board Game!

I'm in heaven! Last week, after a LOT of waiting and filling in of the same form for customs in Madrid twice (people living on Mallorca can't just receive parcels in the post, no, the parcels are held at ransom in Madrid for months and you have to pay extra customs duty even when the parcels come from inside the Schengen zone) I finally got my Norwegian board games Passport and The Big Norwegian Game, both Trivial Pursuit-like. Thank you, good sister Beate who managed to track them down after having gone out of production in 2005! 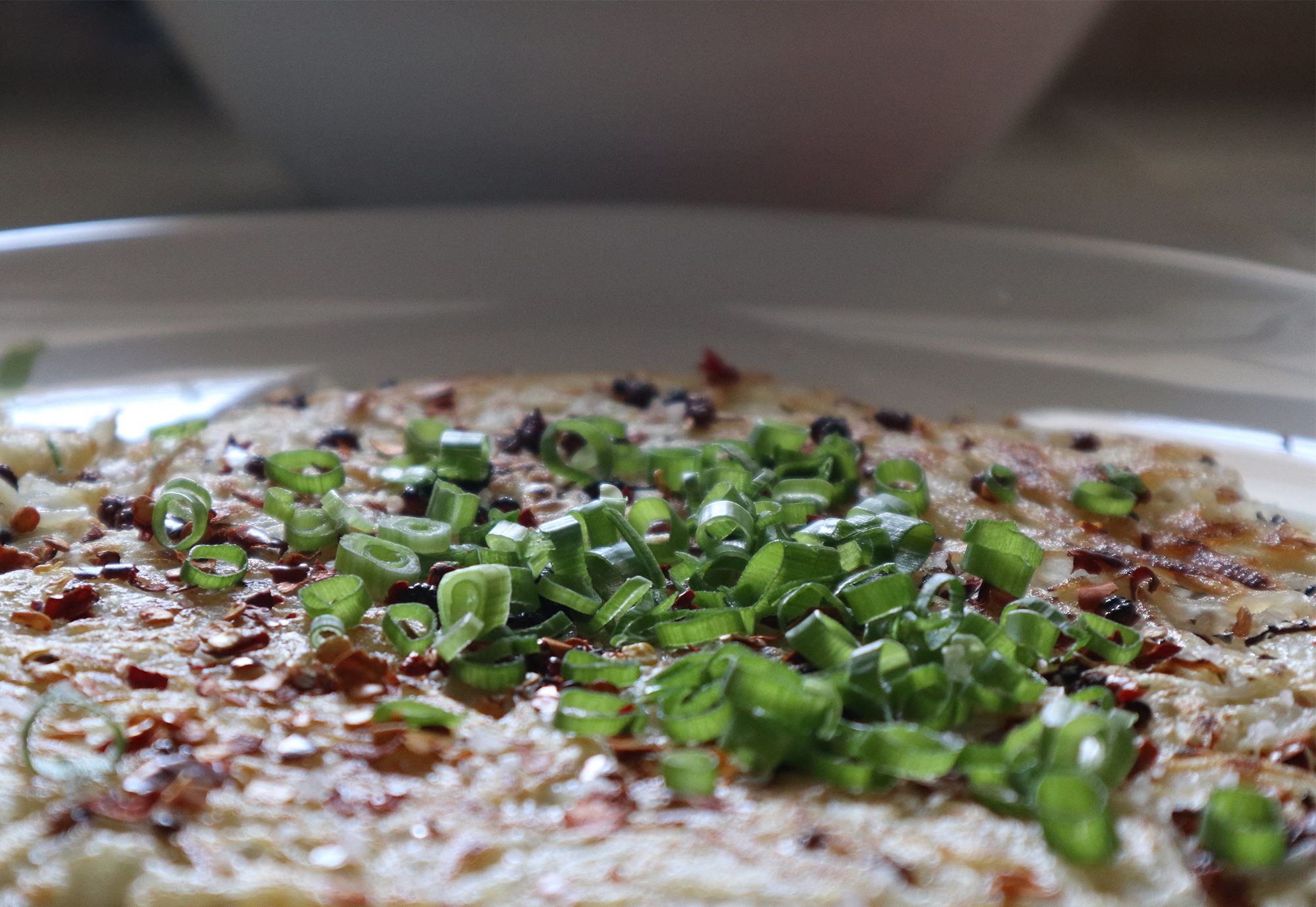 I immediately got to work and cooked up some snacks, two Sichuan potato cakes, salty and peppery soy beans and sweet potato crisps with a spicy dip. Then I invited a bunch of Swedes, in dire need of comfort after the devastating defeat by England on Saturday, poured the wine and waited. 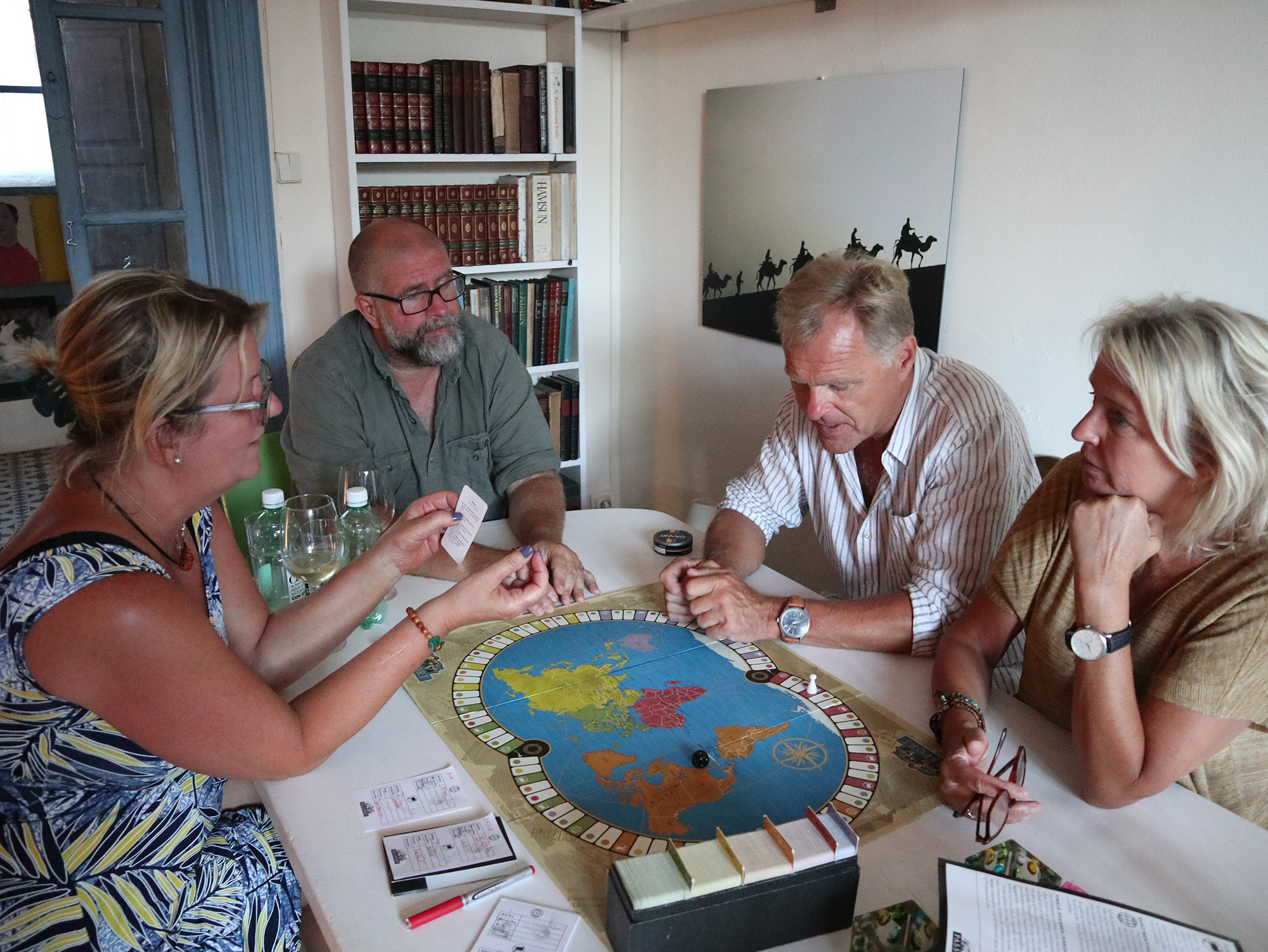 The Swedes had some problems reading out the questions and we all had problems identifying Oceanian countries like Kiribati (if it still exists - a lot has happened since 2005) but OH!!! So, so fun. 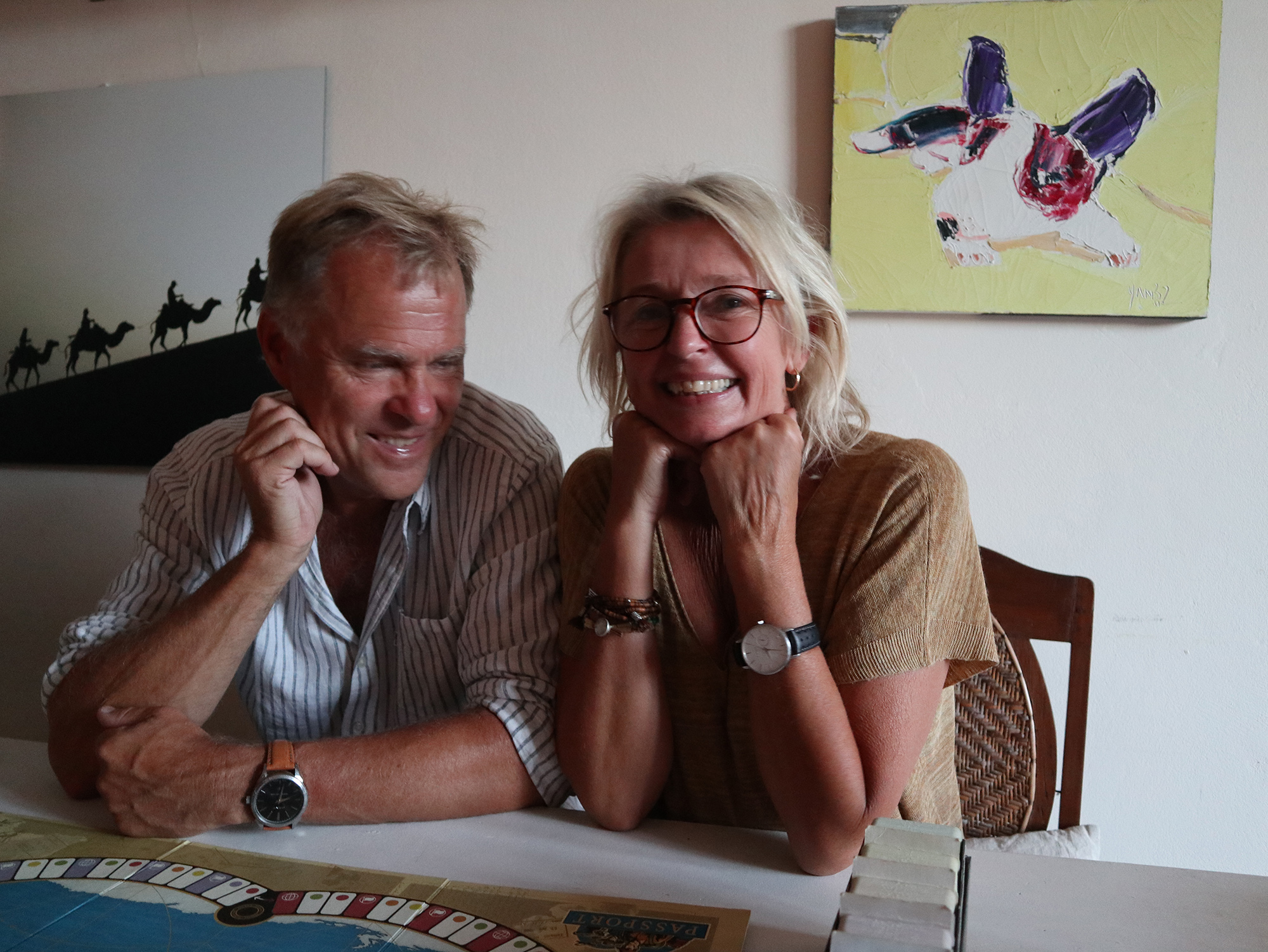 Sichuan Lunch Coming to a Terreno near You 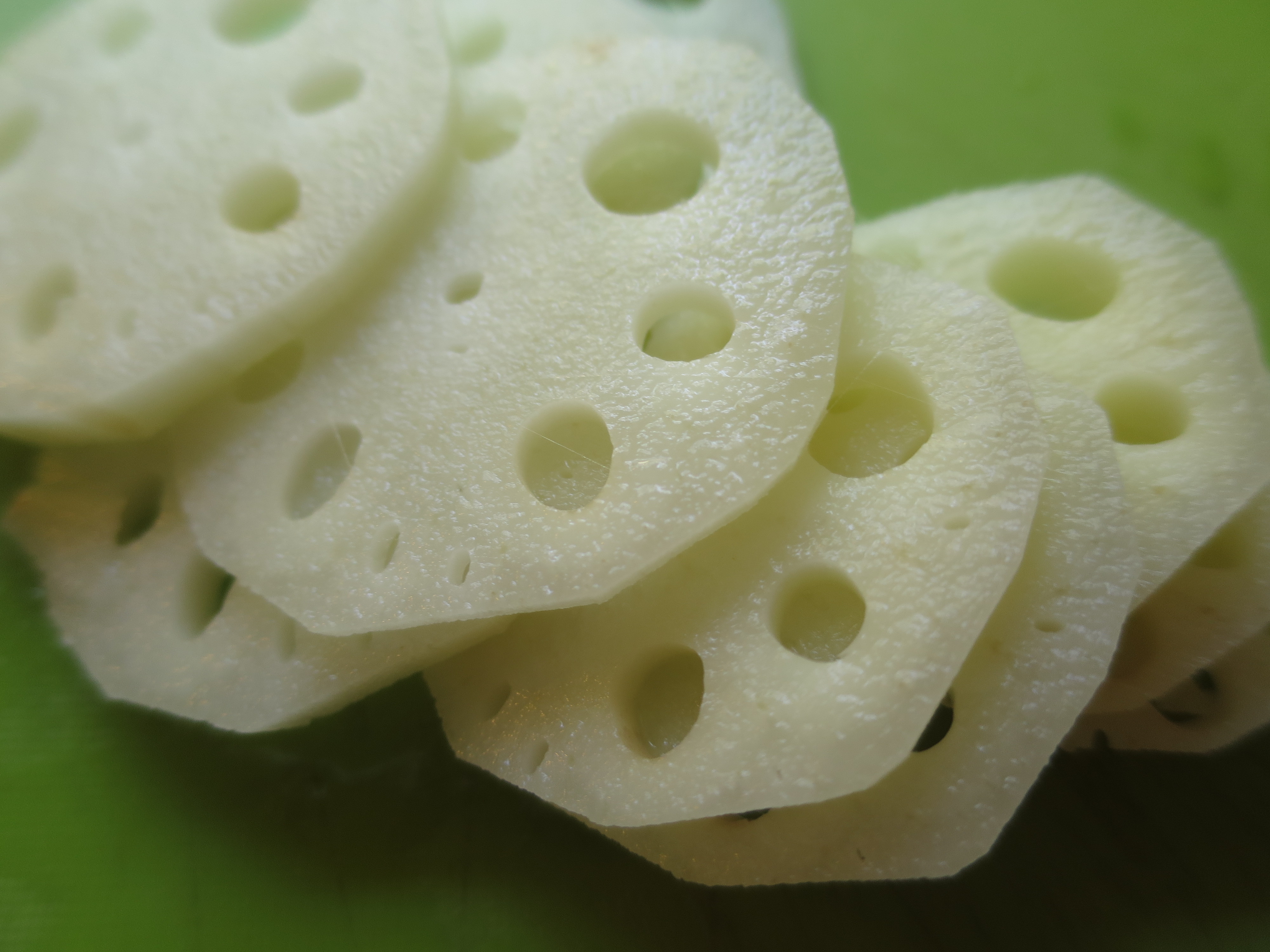 Before I moved to Palma, one of my greatest fears was not to be able to buy this, the greatest of all tubers (?) in fact, the greatest of most vegetables, here. But fortunately the great Asia Supermarked in Pere Garau has fresh lotus roots, as well as proper Chinese spring onions and Cheng Dou ("Tsingtao") and dried chillies and Sichuan peppercorns and... well, everything. 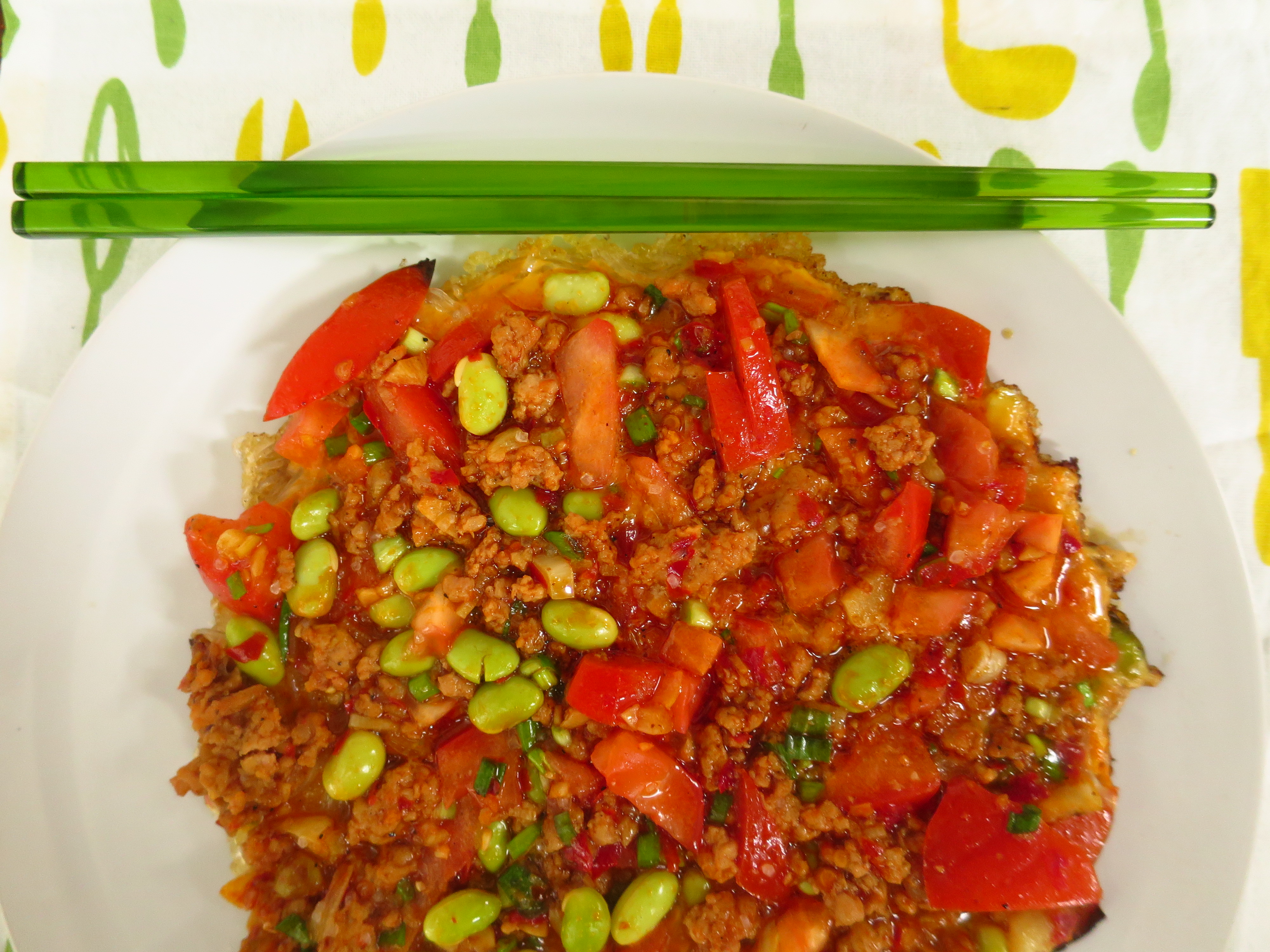 So now I'm going to "celebrate that by..." (when people want to sell you something, they often use the word 'celebrate' in the advertising copy. "Celebrate Summer buying a 400 euro bottle of brandy!") arranging a Sichuan Lunch on Sunday, July 22nd.

Come to my gaff in El Terreno not a second before 2:30 pm, but 3pm is ideal, bringing nothing, as beer and wine are included. But if you don't drink any of these things, please give me a heads-up beforehand.

Oh how fun it will be! Celebrate summer! Celebrate July! Celebrate the mighty Lotus Root, which will feature prominently at the lunch. 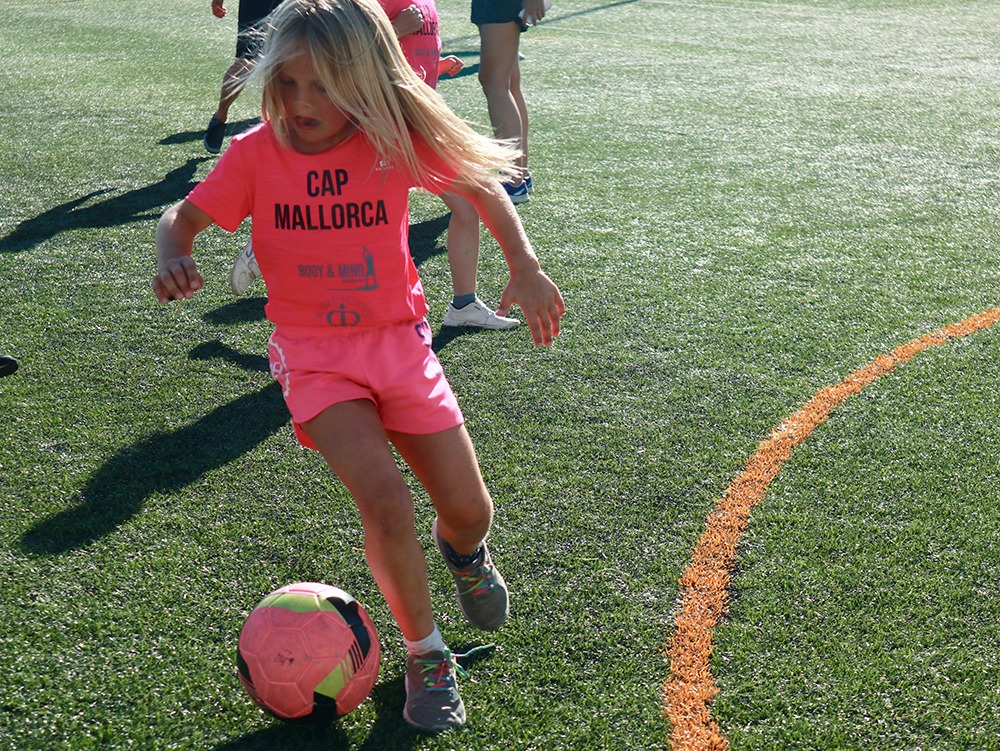 “Kör på nu, flickor! Få bollen i mål!” (Keep going, girls! Get the ball in the goal!) Calvia Beach Padel and Football Club in Magaluf,electric green in the early evening sun, reverberates to shouted Swedish football commands.  It’s the last match of the season, and CAP – Chicas Al Poder (girls of power) – are out in force.

It is also the first real match of the season for the girls, because CAP have only been in existence for a few months. But today the excitement and nervousness are palpable as they face a proper opponent for the first time.

And the opponent is – the girls’ parents.

Some of the fathers are exactly double the height of the youngest girls, and the match at times reminds one of a bunch of tiny wombats in pink shirts going head to head with a herd of giraffes. But even the tallest of fathers and the fastest of mothers are no match for Chicas Al Poder, who literally run rings around them. 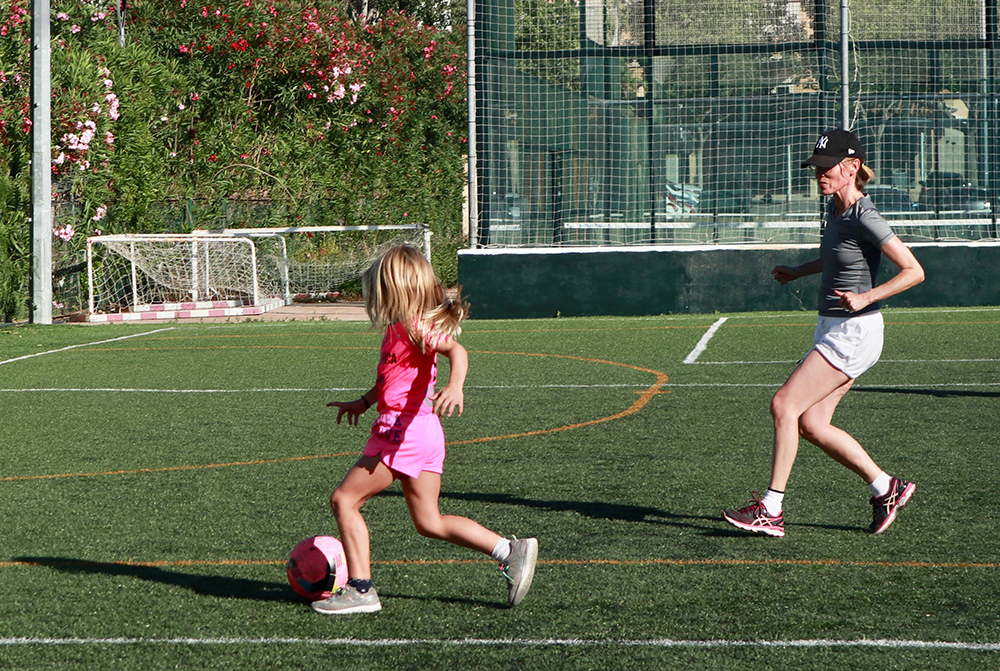 Running at breakneck speed and throwing themselves fearlessly into every tackle with the adults towering over them, the youngest of the CAP teams finish the match with a very decent 3 – 3 draw, which should have been 4 – 3 to the girls, had a stupid goal post not got in the way.

It is obvious that the players have been training hard., and their gung-ho attitude as well as ball control and technique are quite impressive even to a football idiot like your reporter.

“We started out with only five players last September, but word got around incredibly quickly, and now we have so many girls – 25 – that we’ll have to divide them into two teams today,” laughs Norwegian Anne Reese, head of the supporting team and mother of ruthless striker Astrid.

The majority of the players are Swedish, and the language of the match seems to be predominantly Swedish with some Spanish, Norwegian and German thrown in. Even the girls’ Mallorquin trainer, Pedro Gost, speaks Swedish fluently. 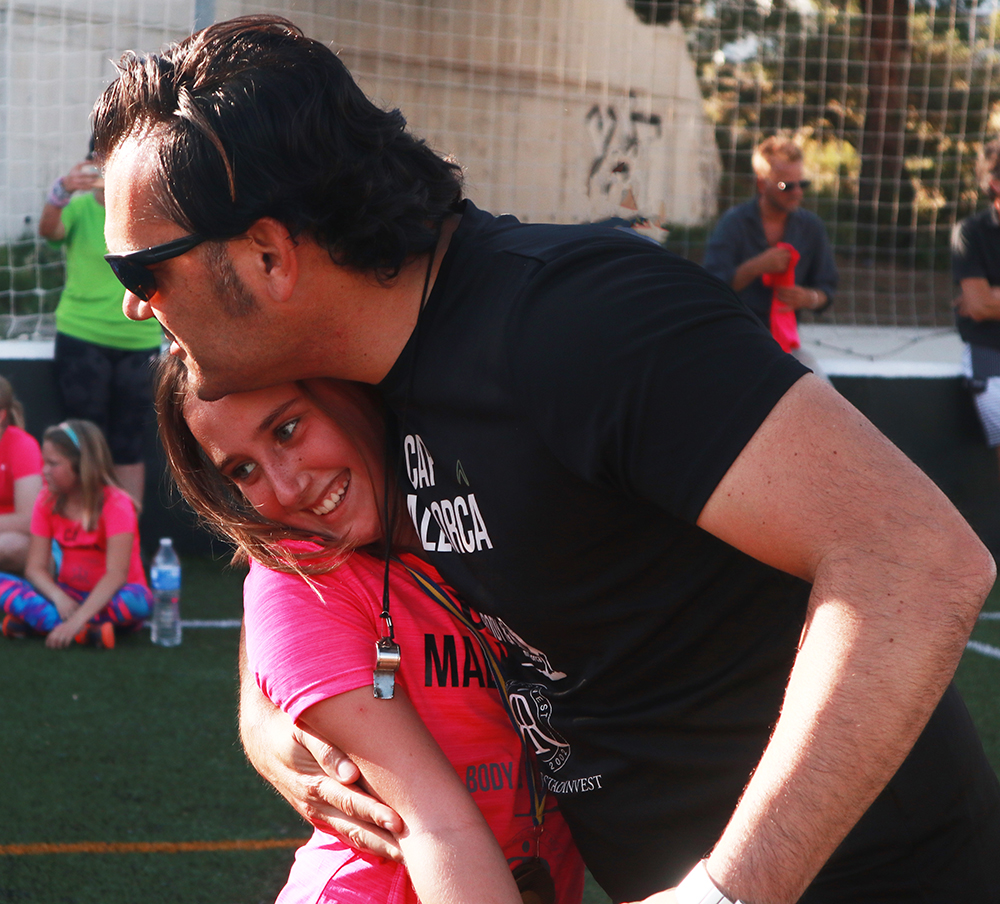 Or make that one of the team’s trainers, for, young as they are, they already have two trainers, Gost and the Swede Maria Åtting.

“The idea of starting a girls’ football team was actually born in Norway and Sweden more or less at the same time,” Åtting says, recalling how she and Reese both happened to be in their respective countries on sabbaticals with their daughters, who both played football on girls’ teams in their home countries.

“And both the girls said “Mom, when we get back to Palma, let’s start a girls’ football team!””

And so CAP burst upon the scene, as the only girls’ football team in all of Mallorca.

In the beginning they played on asphalt – ouch! But scrubbed elbows and knees didn’t dampen the girls’ enthusiasm.

They kept running, tackling and kicking, and soon they had their own club logo and proper shirts, as well as, eventually, a real grass pitch to play on.

“Yes, we have been very lucky in that the famous local football team Son Calieu in Palma Nova have generously offered us the use of their grass pitch for an hour and a half every Wednesday,” says Reese, who also organised the post-match barbecue. 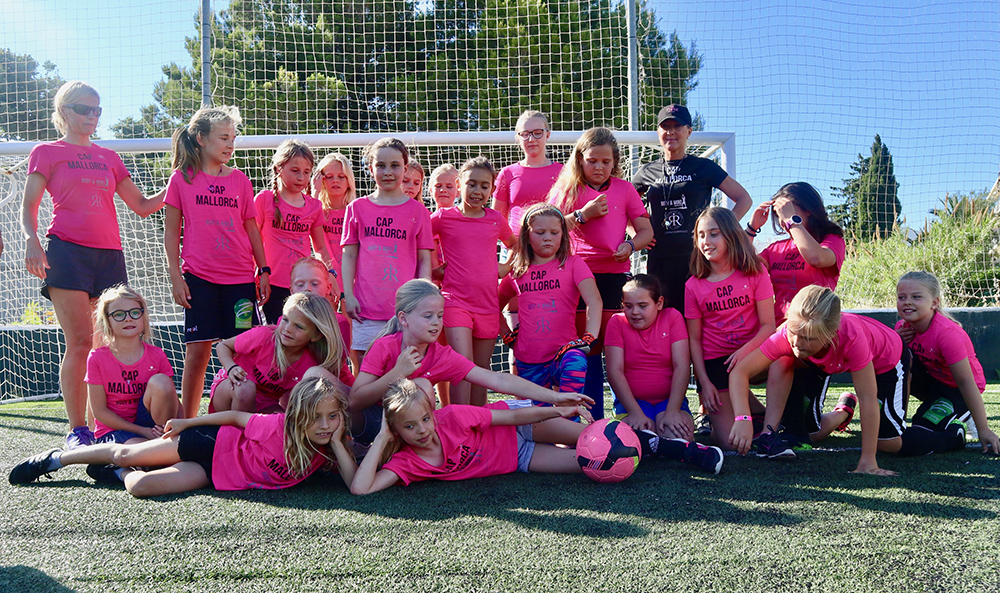 Now the girls of CAP are eagerly awaiting players of their own age and height to go up against. What about a proper Mallorca Cup for girls’ football in Spain, maybe all of Europe, next season? The players, trainers and support team of CAP are certainly all up for it.

And for the parents, who suffered a crushing 2 - 4 by the knee-height demons in the second match, such a cup probably can’t come soon enough.